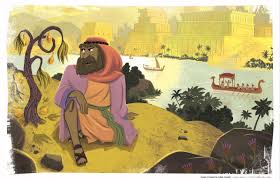 What makes you get angry? Has getting angry ever helped you?

Have you ever heard the story of Jonah and the whale? Jonah was a prophet of God that was told by God to go to the evil city of Nineveh. Nineveh was Israel, and Jonah’s, enemy, and had been very mean to Jonah’s people.

But God loved the people of Nineveh, and he wanted them to repent. And so God told Jonah to go and preach to the people of Nineveh and call them to turn to God. But Jonah didn’t want to go. So he turned from the Lord, ran away, got on a boat, and tried to escape from God.

But you can never run away from God can you? Onto the sea God sent a storm, and that storm left Jonah out of the boat and in the water. Then God sent a giant fish (sometimes called a whale) to swallow up Jonah. Yuck.

After three long days, the fish spit Jonah out and Jonah finally went to Nineveh. He preached to the people just like God wanted. And the wicked Ninevites repented and turned to God for his love and forgiveness. Yay!

But this made Jonah very angry. Listen to how the book of Jonah describes his anger:

Jonah 4:1-4. But it displeased Jonah exceedingly, and he was angry. 2 And he prayed to the Lord and said, “O Lord, is not this what I said when I was yet in my country? That is why I made haste to flee to Tarshish; for I knew that you are a gracious God and merciful, slow to anger and abounding in steadfast love, and relenting from disaster. 3 Therefore now, O Lord, please take my life from me, for it is better for me to die than to live.” 4 And the Lord said, “Do you do well to be angry?”

Why was Jonah angry?

So God decided to teach Jonah another lesson. But this time instead of a great big fish, God would use a little plant.

God allowed a plant to quickly grow up around Jonah but then God suddenly let the plant die. God asked Jonah if he was angry that the plant died. Jonah said YES! I AM ANGRY! (he’s yelling).

And then God taught Jonah a very important lesson. He said “Jonah, if you are so angry about a plant dying, shouldn’t I be angry about the people of Nineveh dying without knowing that I love them and forgive them?”

Because of Jesus God will never be angry at us, just our sin.

With Jesus we can be angry about sin, and not angry at God.

Discuss: Have your children make a list of some of the things that make them angry. Show them the difference in being angry at a person or being angry about sin. Talk to them about replacing anger with love. Ask “Why should we love others instead of being angry at them?” Ask: “How can Jesus help us love people and be angry at sin?”

Also this is fun:

You were so angry at my sin that you died for me so that I could be free from sin. Help me to not be angry at God or others, and only angry at sin.

A daily reminder to yourself and others of who you are in Christ.